THE MAN WHO KILLED THE FRONT DERAILLEUR

First to the market with a dedicated one-by drivetrain, with first 1×11 and now 1×12. We took the opportunity to chat to Chris Hilton, SRAM’s drivetrain product manager, about the state of play in the world of gears.

RADventure: Can we start back in the beginning with the launch of XX1
Chris Hilton: Our message with XX1 was pretty clear; it you like to go fast and ride hard it’s a great product for you. With GX and X1 the technology is the same – it’s 10-42, 11 speed, one by specific, it’s all of those things. While one-by started as a high performance racer product, the benefits of one-by – the lightweight, the simplicity, the ease of use, the durability, are all something that everybody benefits from. Even if you’re not an experienced or knowledgeable rider just the fact that you have less things to think about while you’re riding makes the riding more enjoyable.

Our fundamental belief with XX1 was we knew we would be successful with the people who were riding 1×10 or two-by always in the big ring. That one was an easy one. But we don’t want people thinking one-by is limiting, or for hardcore riders. The benefits, of just making shifts in the back, of not having to make decisions or having to look down to check which chainring you are in. There’s a lot of confusing information there, just in drivetrains. Drivetrains had become complicated 2×10, then 2×11 and 3×11 and then there’s possibly some sort of fork lock out lever, a seatpost lever, maybe even a rear shock lever.

That’s a lot of stuff going on. It’s a lot of stuff that just detracts from the pure enjoyment of riding your bike. It’s like singlespeeds, people rode them to be hard, because it was tough, but they also enjoyed the simplicity.

For us it’s really important that we help people understand that there is absolutely plenty of gear range on our one-by drivetrains. It’s just a matter of taking that range and putting it where it’s appropriate for you. As long as you have the right chainring on your bike you’re going to be more than covered. I don’t think we have too much, but I definitely don’t think we have too little for anybody.

It’s not about high performance, the performance is there, that’s a proven, it’s really about trying to make your bike ride better, help you enjoy it more.

With XX1, so when I wrote the original product statement I guessed how many we were going to sell. So I said ‘we’re going to sell 20’, or whatever the number was, I know but I’m not going to tell you. We’re going to see this many and then Sales somewhere down the line see the product and then they make their guess. They said ‘Chris said we’re going to sell 20, we think 10, let’s make it 10’. We sold the sales forecast, the entire year’s sales forecast in six weeks. The demand was so great for it that we literally spent the first year playing catch up, trying to make enough cassettes and chainrings, and while that may seem a good problem to have its actually not. We planned capacity, we trained people, we bought machinery, assigned space in our factory based on a forecast and while it’s great to beat your goals, when you shatter them so completely it has it’s limitations. It’s great but it’s a huge challenge. We haven’t seen it slow down. We didn’t see stabilisation when we introduced X01. X0 is like the heartbeat of the company. We thought that it would have an impact on sales of XX1 but it doesn’t seem to have.

So you’re obviously happy with the adoption of one-by.
With one-by the great thing was that it was really easy for us look at and say we can go cheaper, more affordable, better value, whatever you want to call it, but we can also move that same technology to DH which was a natural progression, to cyclocross with our CX1 group. It was great to grow it by putting it into other categories, the benefits of one-by has a lot of natural progression.

The people and industry were ready for it. It was evident in all the aftermarket chainrings and bastardised cassettes. All these things are proof that more people want it. They don’t want to be modifying their bikes, taking cassette cogs out, using a derailleur in a way it wasn’t designed to be used. The hacks are interesting, and that’s what moves things forward, but we prefer to offer a fully engineered solution. The range, the derailleur technology and chainring technology are all unique to us.

Another benefit to the consumer is that bike geometry can get better. Frame designers have to think of fitting in a drivetrain. Assymetric chainstays and bent seat tubes, most of those things are compromises to the front derailleur.

It’s interesting when you’re here in Garda and you see so many different types of people from all over, and I saw so many SRAM one-by bikes here. Which is really unusual because a year ago, or two years ago, it would have been all 3×9 or 3×10. And I was amazed as I rode up the hill, the endless gravel climb, to see so much one-by. It just seems like people have grabbed onto the simplicity. You don’t need a humoungus range of gears, what you need is the right range of gears, and I think that’s what people have grabbed on to. If you have the right range, move it to where you need it and you’re good to go. I really believe that’s what has happened. 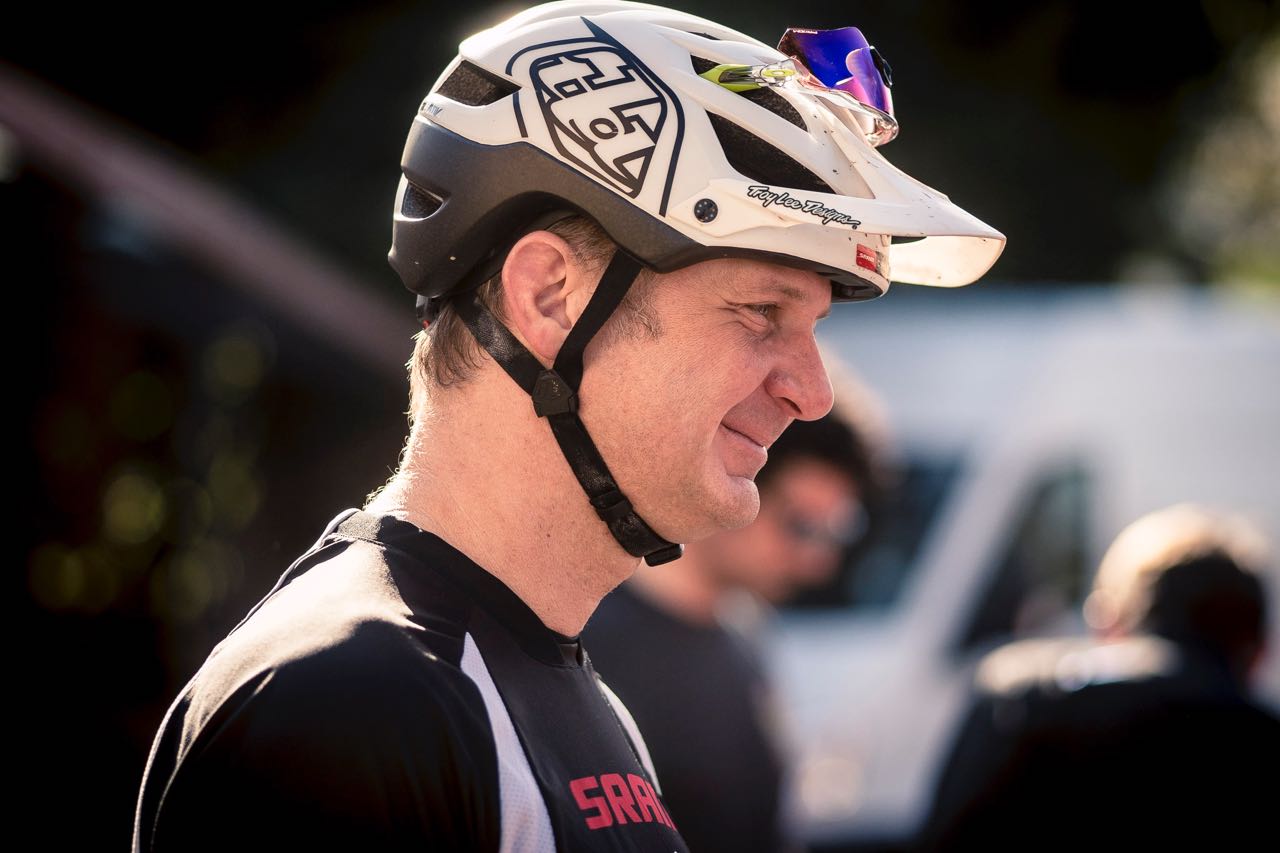 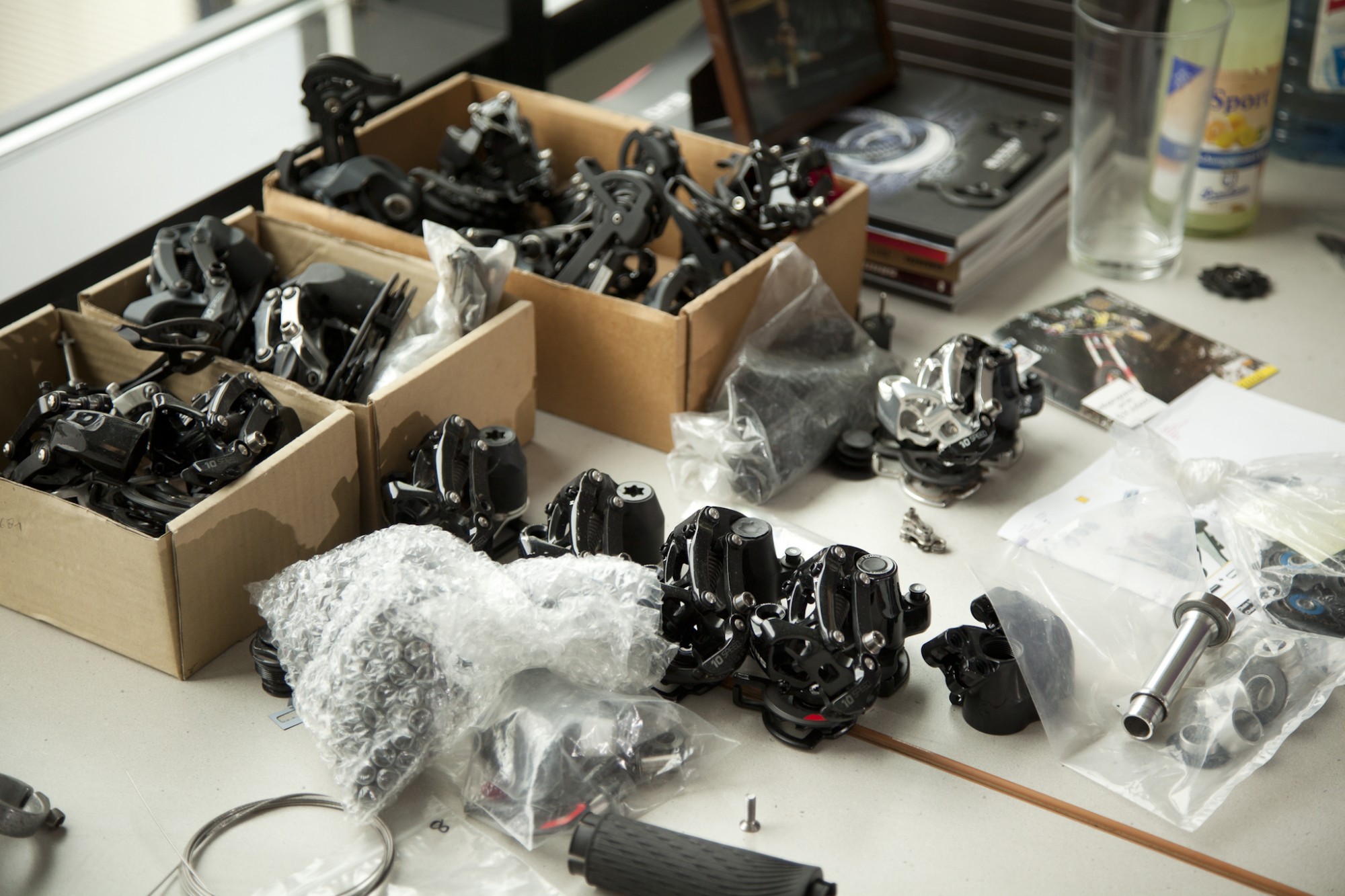 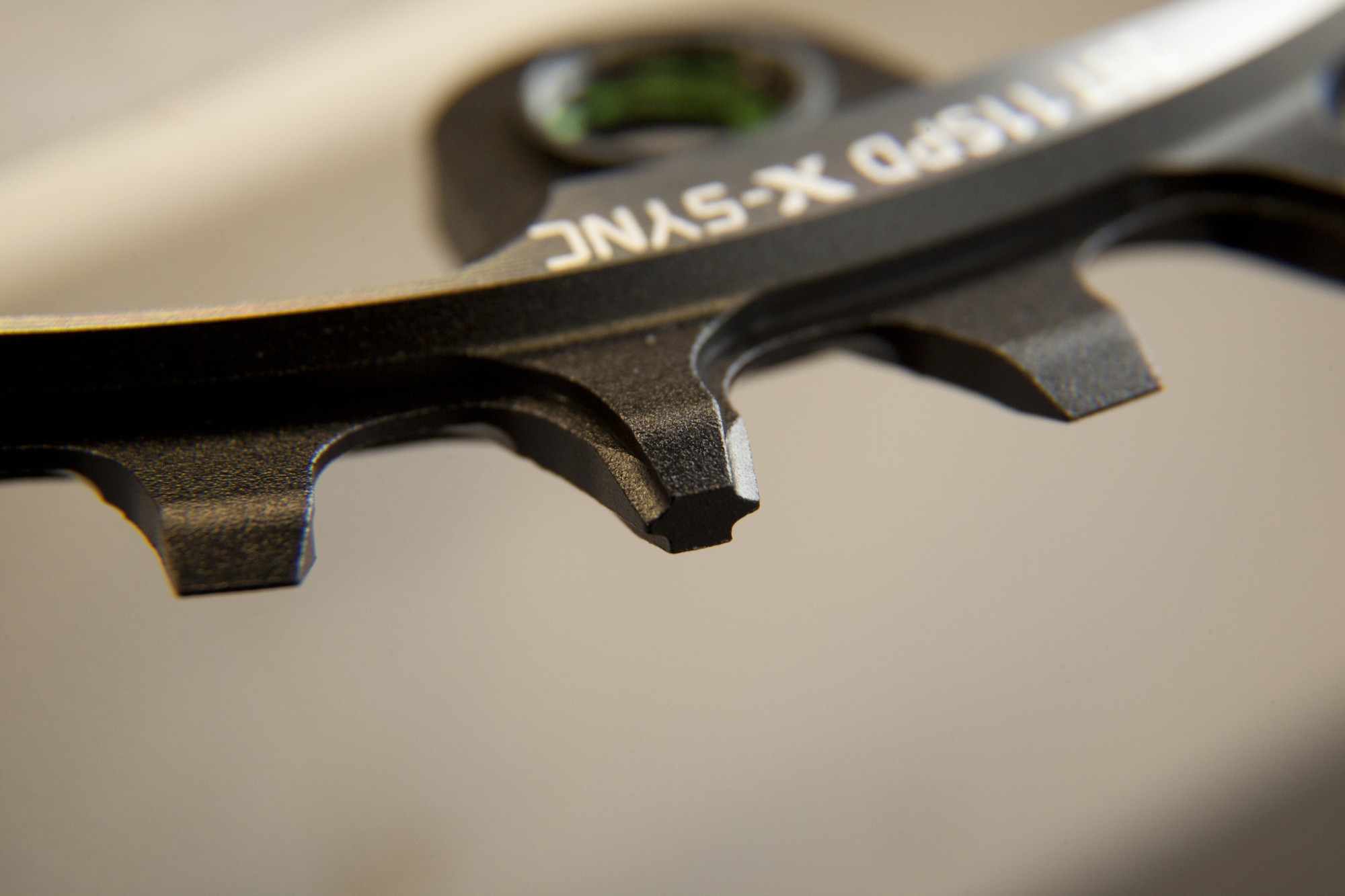 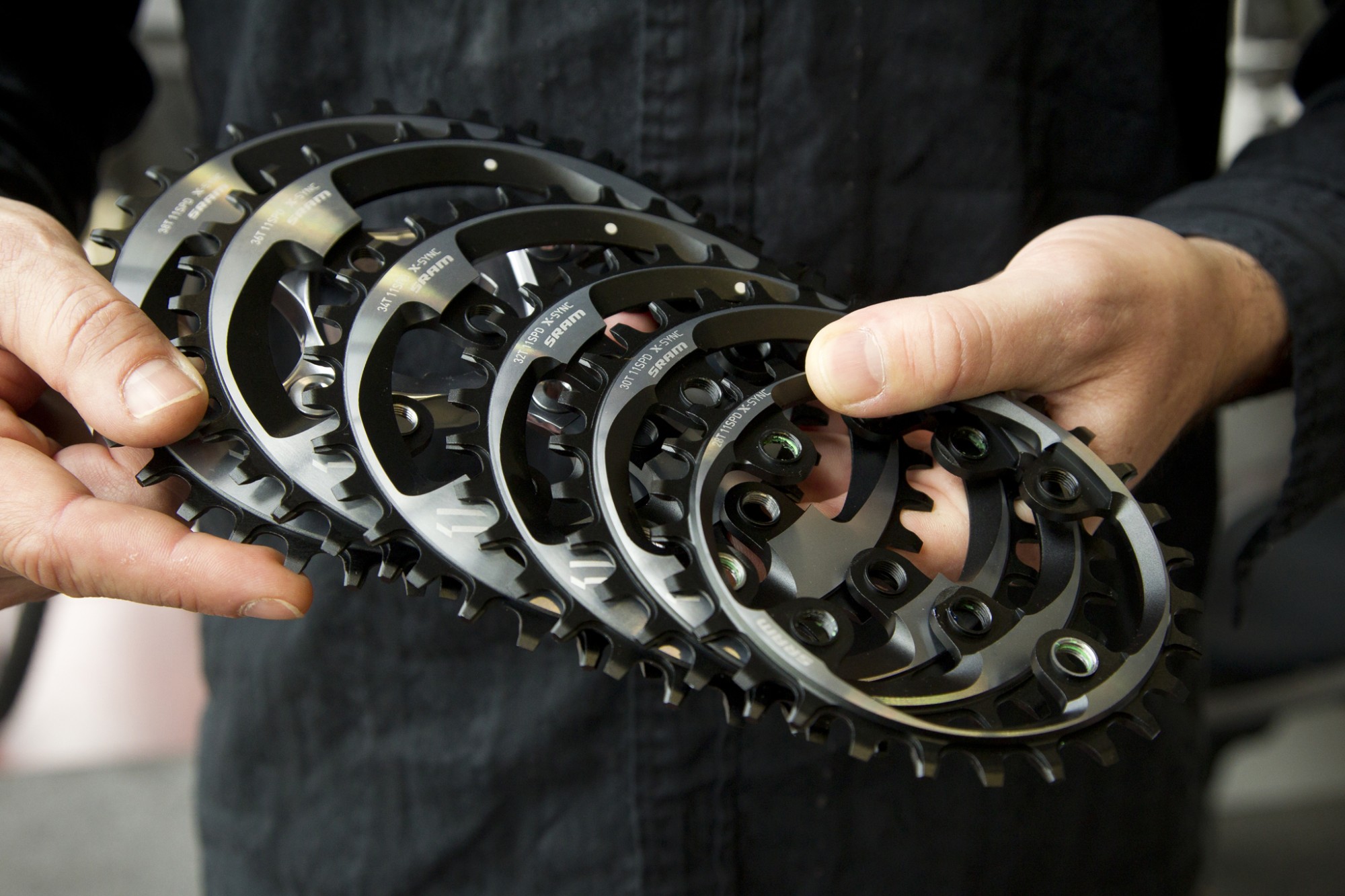 Chainring choice is fairly crucial to people’s initial impressions.
If you get your climbing gear where you need it everything else falls into place. We did some pretty interesting studies, because gear range, specifically low gears, has always been, not unresearched, but our answer has always been to grow the range and move it lower. Things were getting pretty ridiculous with 22×40 on offer, so we looked at that. Does a lower gear help you climb higher, climb faster, climb more comfortably? We always believed probably yes.

What was interesting was that when we took a really steep unclimbable hill and put a three-by and a two-by and a one-by bike at the bottom of that hill and we said to a bunch of people, ‘let’s see what you can do’. Almost without exception we saw that the people on one-by bikes could climb just as high, or higher, with not as low a gear as the people with really low gears. We found that on hard climbs, this was in Italy, while a lower gear helps you in your head go up a climb easier the reality is that you simply make that climb longer. You spend more time climbing versus having the right gear, putting a little more effort into it, and getting it over with sooner. The suffering is a net equal.

Then we went to altitude where sometimes the climbing wasn’t so steep, we went to Utah to Burro Pass, and it isn’t that it’s that steep but it is long and you can see the whole thing. It has steep pitches on it then it levels out, but you are oxygen starved. We were in a biggish group, a shuttle bus full, and there was a range of drivetrains but without exception everyone was off and pushing at the same point. Sometimes your brain says, or your body says that enough is enough and it’s not based on gear range.

With GX 2×11, you have an insane climbing gear.
It’s a big cassette with a huge range of gears. There are people who believe they need this gigantic range and maybe they do, I don’t know where they live. But I’ve yet to meet anyone who can’t ride one-by. There’s still people out there who ride what they ride and believe what they believe, I guarantee I can build a one-by bike that will be suitable and simpler and lighter to use. Do you need more gears? Absolutely not. You don’t.

Once you’ve gone one-by it’s hard to go back
Putting a front derailleur back on your bike is really hard. It’s like taking a front suspension fork off your bike. We built one-by for mountainbikers, it’s moved into cyclocross and road now, but we built it for mountainbikers. If you ride one-by you aren’t ever going to go back, it’s like going back to putting a tube in after going tubeless, you feel like you’re handicapped by having this step backwards. 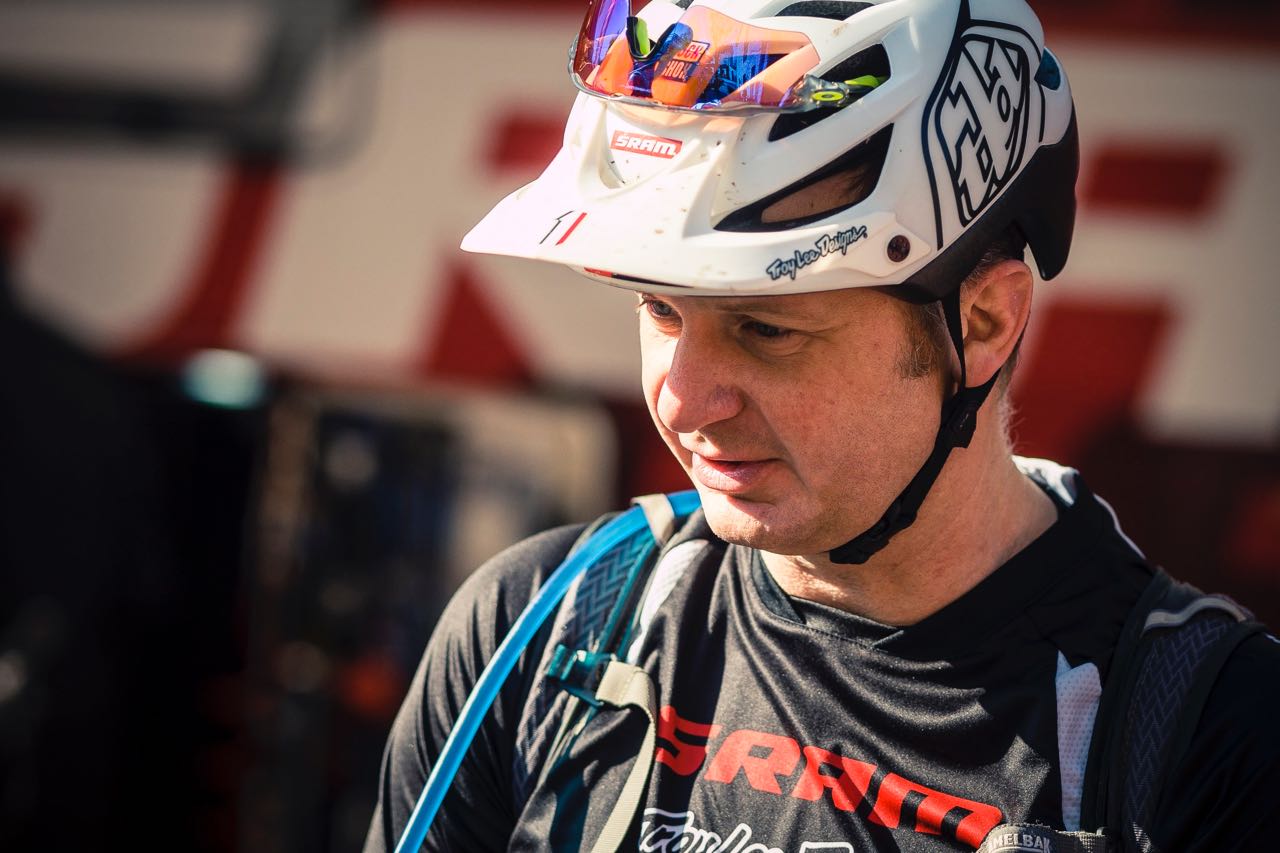 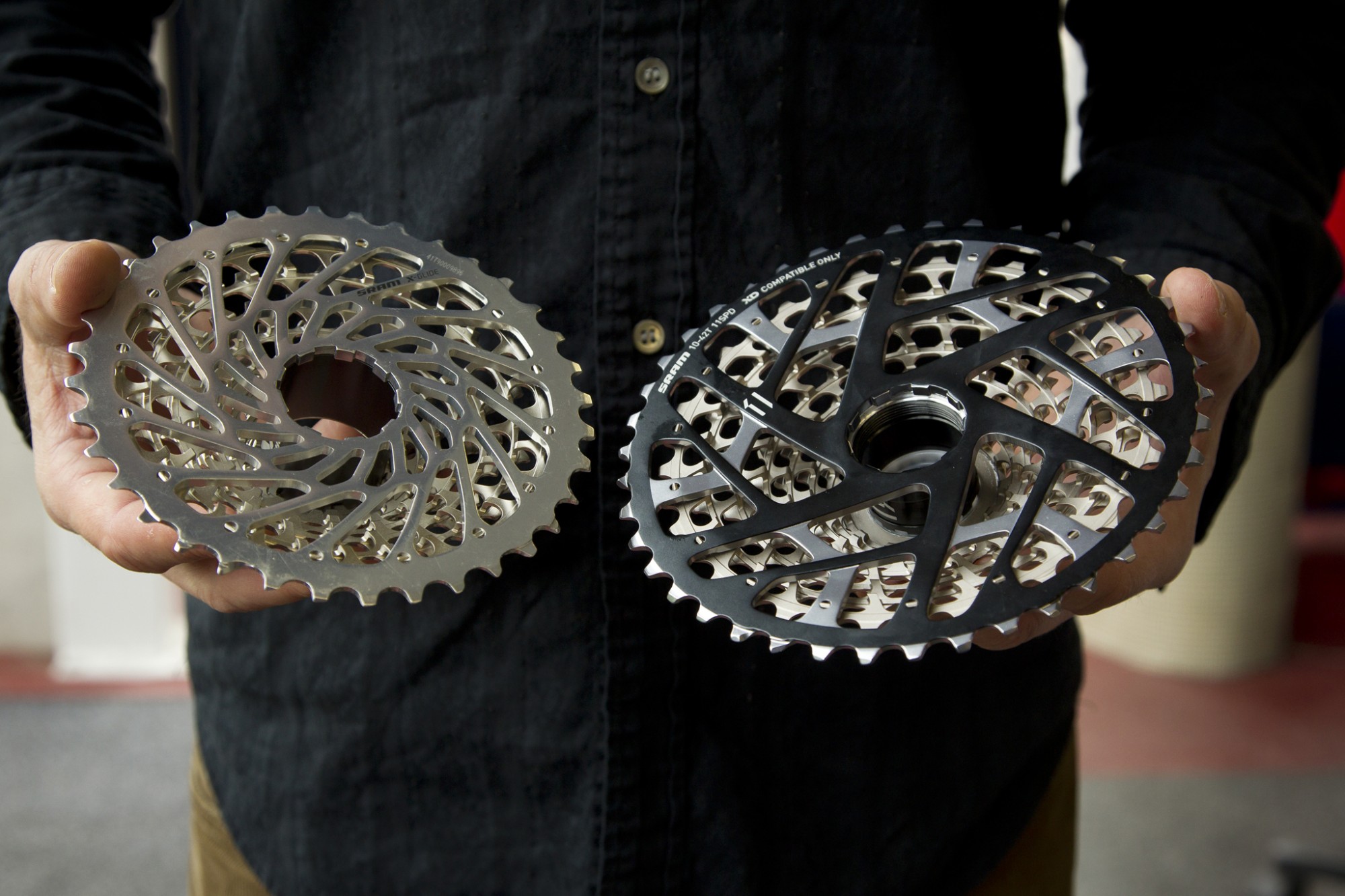 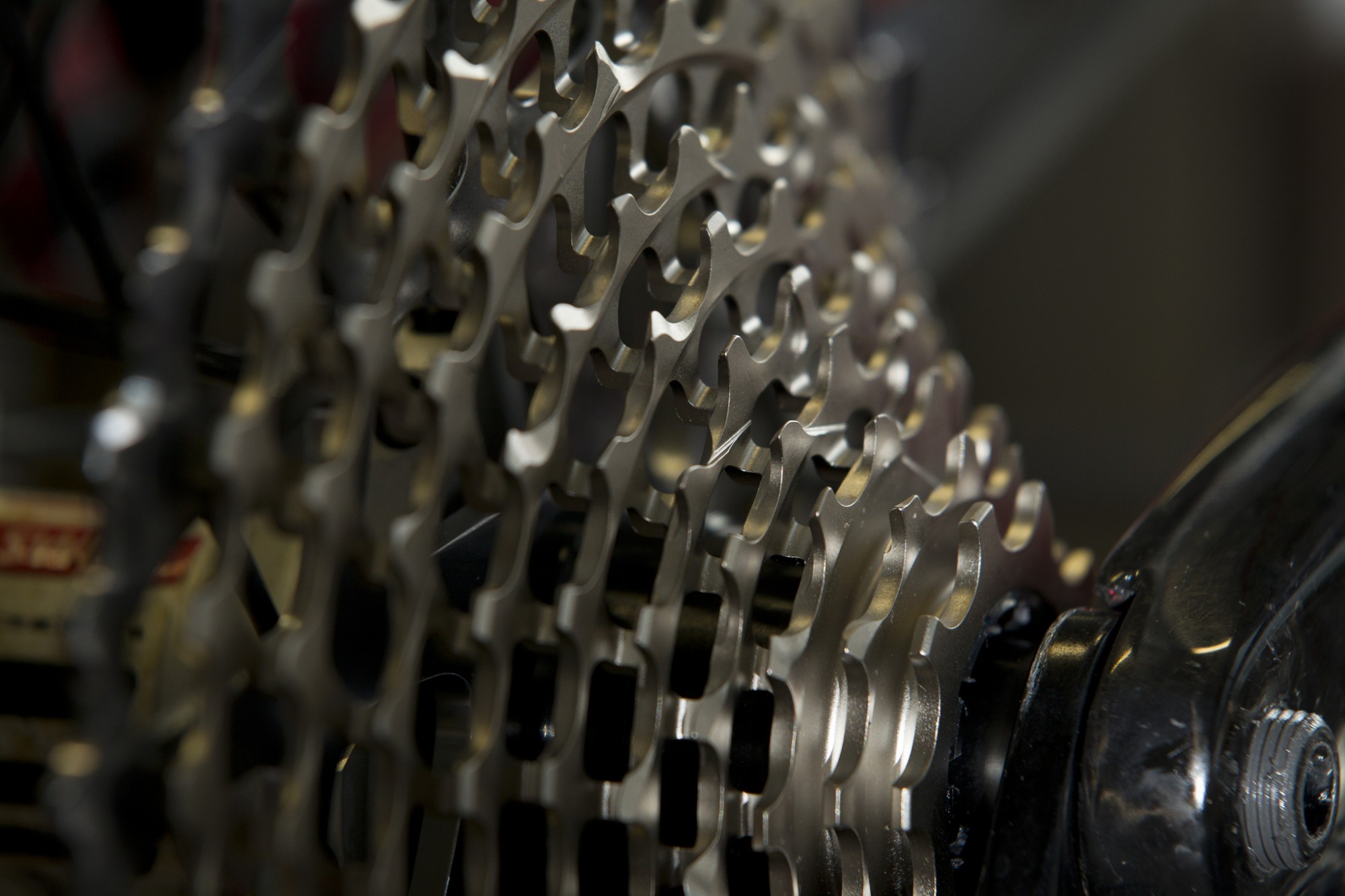 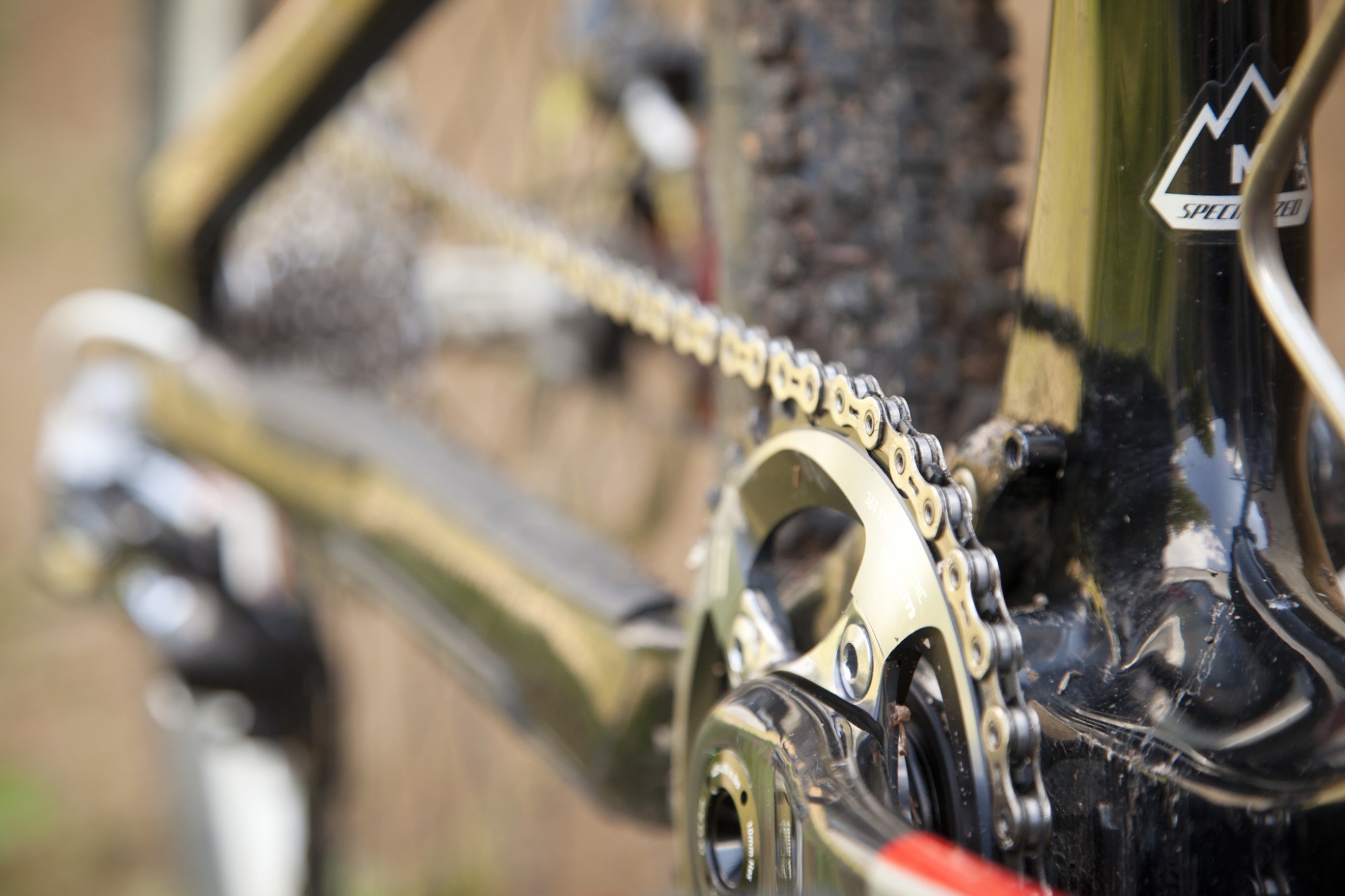 So now you’ve got rid of the front derailleur, is it time to get rid of the rear? SRAM’s got expertise in hub gears after all. Is this the future?
Well Schweinfurt has been building internal gear hubs, you know, they’ve been building bike parts since 1895, 1897. Gearboxes right? The obvious question. Well it’s not what the peanut gallery on the forums would have you believe. It isn’t an invisible, maintainance-free perfect system. It requires a lot of maintainance, it’s heavy, it creates drag. You can build a great gearbox, no question, but that means you have to go to your customers and say ‘here’s our gearbox, adapt it to your frame’ and imagine all the customers we have. They’re going to say ‘no that doesn’t work for our suspension’, so it’s not as easy as it first seems. We’ve built that with Hammerschmidt and internal gear hubs, and frankly they were good systems but they just simply didn’t stick. It’s because the vision of the gearbox being this invisible solution for everything isn’t actually true. The reality is that if you have a mechanical system with a rear derailleur and one-by and something goes wrong with it you can tweak it, you can replace it, you can work on it quite easily. If you put a gearbox on your bike? Good luck, it’s not going to be easy to do. But are we doing it? Yeah, I mean really? Of course.

And the same goes for electronic shifting?
Sure. You can see what’s happening with our road groupsets, imagine how much easier it is when you’ve only got one derailleur to deal with. Front shifting is incredibly energy sucking, just think about pushing the chain over. It takes a lot of energy to make the front shift because that chain is under load when you make a front shift. The beauty of a one-by drivetrain is that there isn’t one [a front derailleur], so energy consumption is significantly reduced.

Lastly, oval rings are seeing a bit of a comeback.
Yeah. I’ve been riding a lot of oval rings, I find them really interesting. I’m not sure what exactly to do with it, they’re interesting in some aspects, for some things I really like them. And in some cases I really hate them. Like the same ring. I’m not sure what to do with them, in the meantime let the market look at it and decide what they like. There’s a lot of ideas about oval chainrings that make sense, but at the same time they don’t make any sense at all. Round chainrings work for the vast majority of people and that’s okay.

Thanks to Chris for his time.
SRAM XX1 Eagle

Footnote:
SRAMcast Episode #2 – How 1x Came to Be