It's all about the attitude, you break down the processes, you set yourself goals, you stick with it and make it happen. Technically it's known as the curriculum of excellence

The Tweed Valley in the borders of Scotland is a fairly unique place. A landscape that seems to be riddled with trails – historic, legally built and a network of hand-cut unofficial beauties that have provided the basis for two Enduro World Series races. Ride any of the valley’s forests and it’s hard to miss the sheer number of trails that either drop off the forest roads or else eject riders back out onto them. They’re literally everywhere you look, and inevitably there’s another cache that are hidden or tucked away from prying eyes too. It’s a place that has seen an influx of riders, keen to live amongst this hotbed of activity, so popular that it’s resulted in burgeoning waiting lists for the three kids cycling clubs

It’s also that unique combination of landscape, trail diggers and bike community that provides the outdoor classroom for the UK’s first full time further education course dedicated to mountain biking. Developed and delivered in partnership by Borders College and Dirt School it’s a race performance oriented course which results in a suite of qualifications, race craft and life skills for all of it’s participants.

We decided to dig a bit deeper into the story of the BASE with the help of Chris Ball and Andy Barlow. 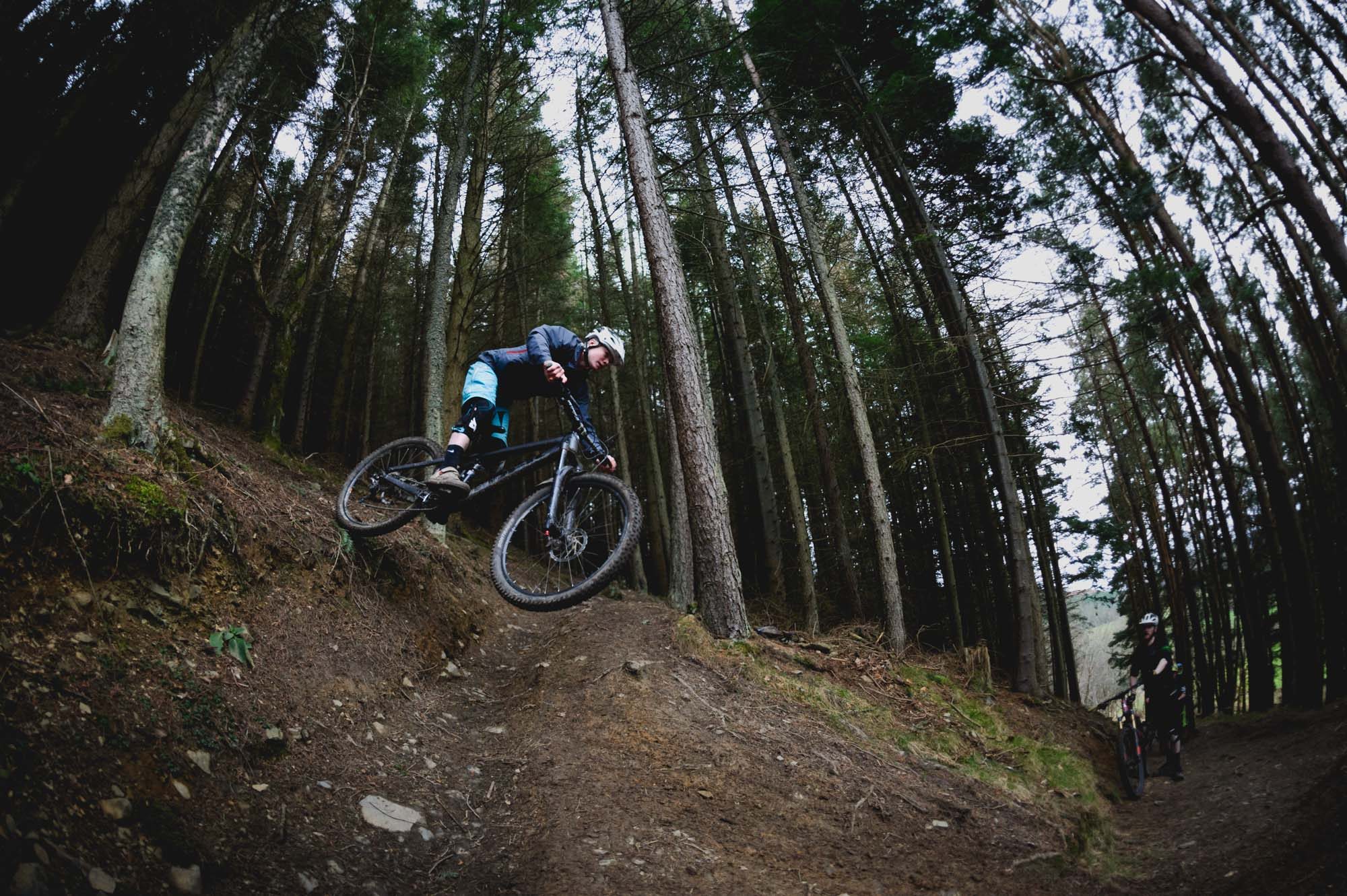 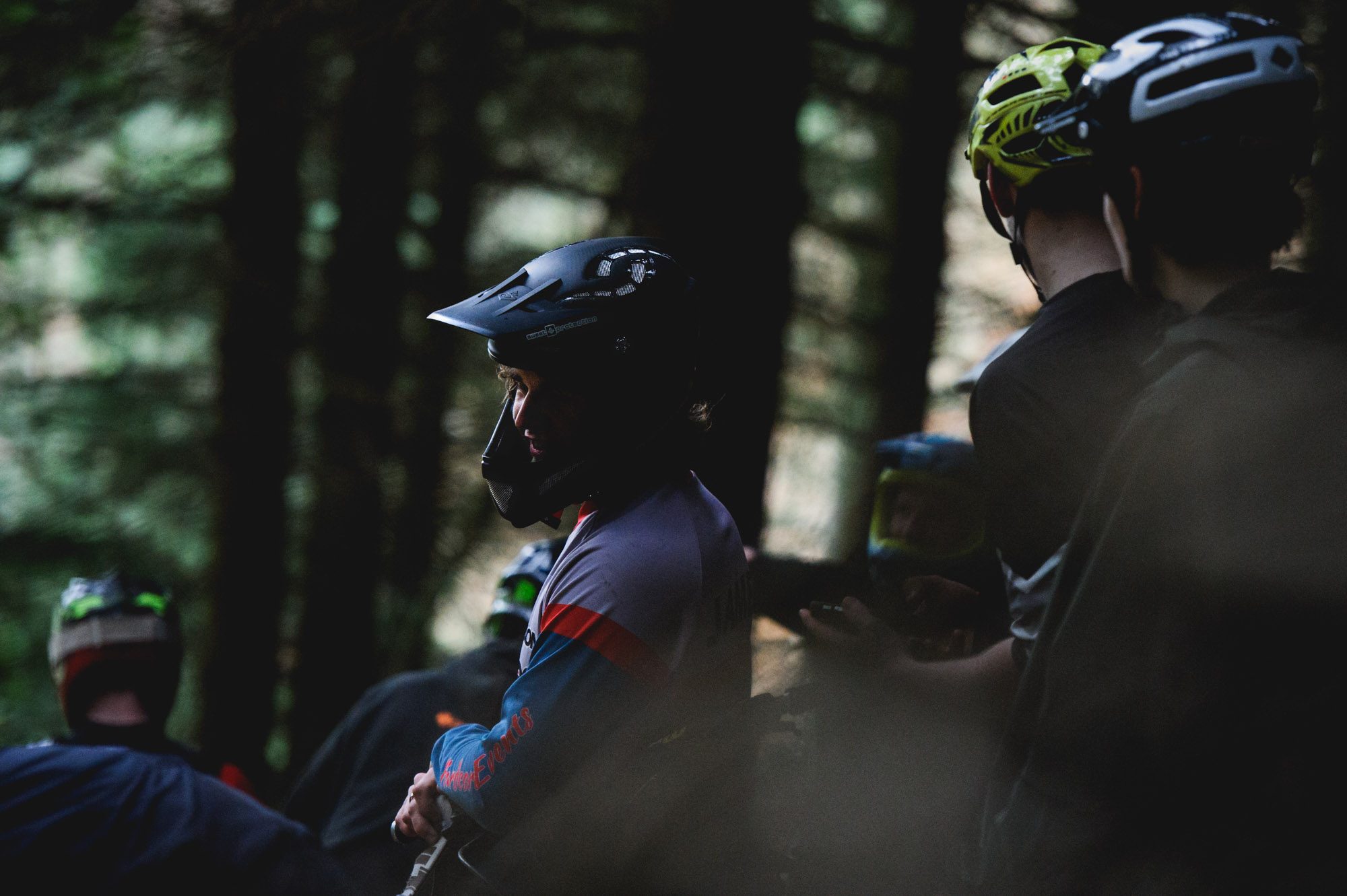 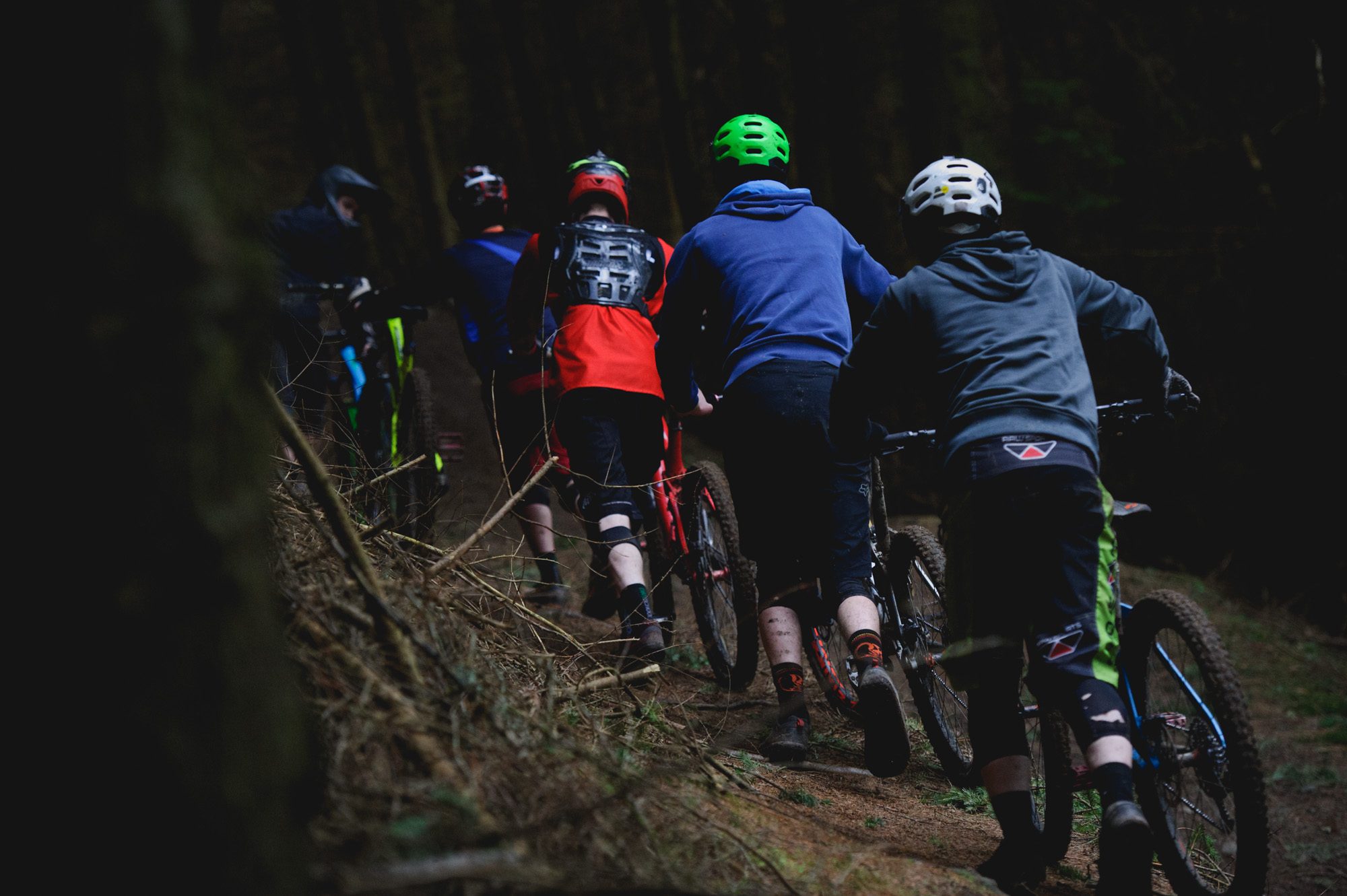 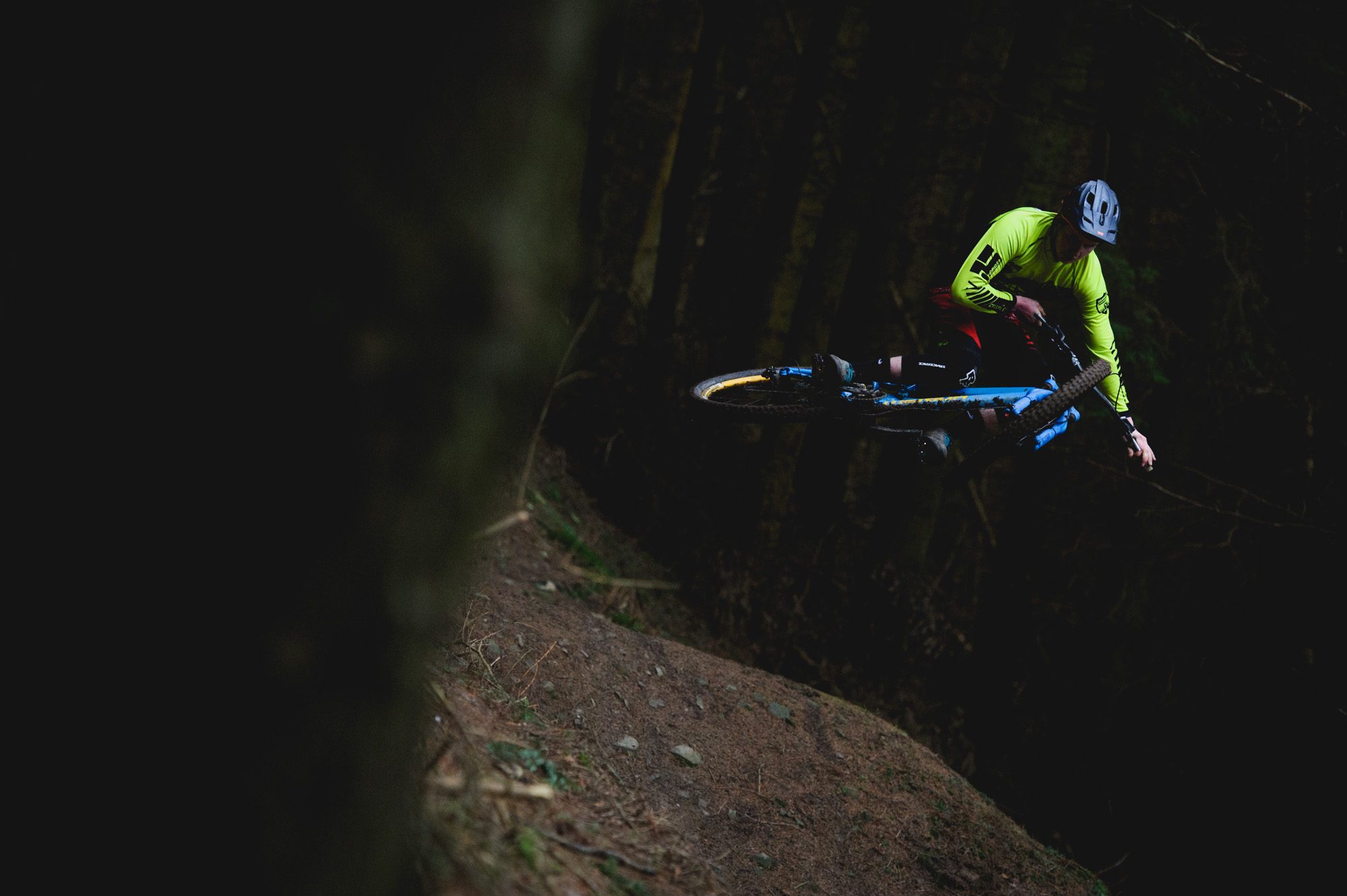 RV – So starting at the beginning, how did the BASE course come into existence?

Andy Barlow – Well the mountain biking in the area is amazing, and there wasn’t anything like this (course) in the world. At the time (about eight years ago) it was a guy called Richie Gray who was doing the BASE rugby course, they were converting the syllabus from a football course. Scottish Cycling put Chris Ball in contact with Richie and they tweaked it for mountain biking. So for the first year there were five riders on the course and they were all part of Chris’ development programme from Scottish Cycling.

Chris Ball – The first year there were just five lads and they were all on the Scottish Cycling Programme that I was coaching at the time. That made us realise there was something there. It started as BASE downhill but we quickly rebranded it as BASE Mountain Biking, and increased the numbers which was good because it took the pressure off the students. At first there were five lads and me and it was really intense. The next year there was Andy and me, and twelve students; that’s gone on to become Andy, and Tom, and Ruaridh (Cunningham) and Rab (Wardell) with 18-20 students.

The performance element is still there, but it’s become as much about the person behind the performance. So there’s time keeping, professional behaviour, understanding, learning, listening and being purposeful in your practice. So that when the lads reach a level and realise they won’t be a professional mountain biker (and nine out of ten don’t) they still have this amazing set of skills and tools that they didn’t have before.

Andy – I think realistically that’s how it goes for most of these guys. A small number will make it as World Cup riders, we’ve had quite a few you know, but a lot more will be going and doing a season in Canada, New Zealand or starting their own business. Some go on to further their studies in Sports Science or Engineering degrees. 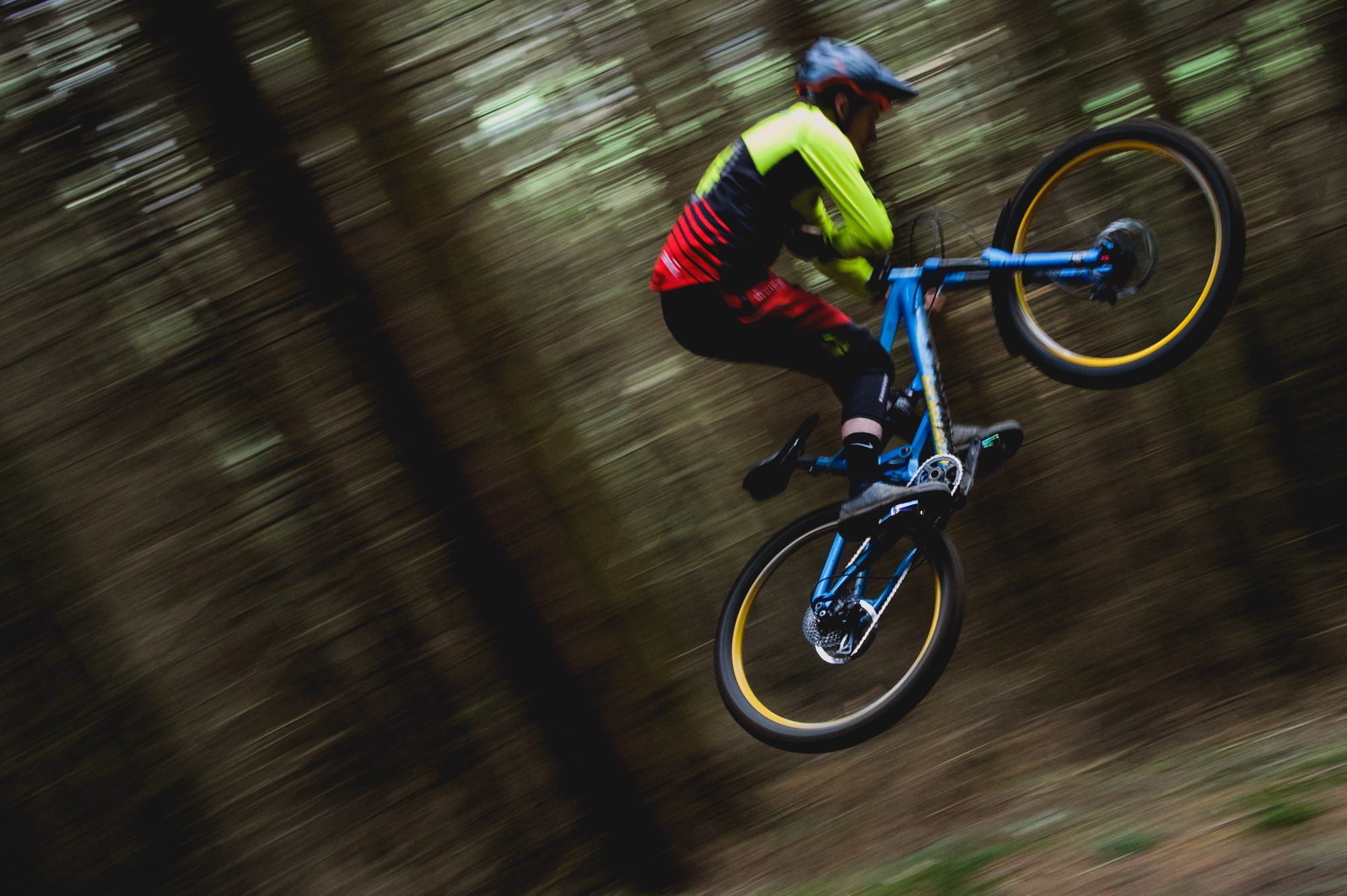 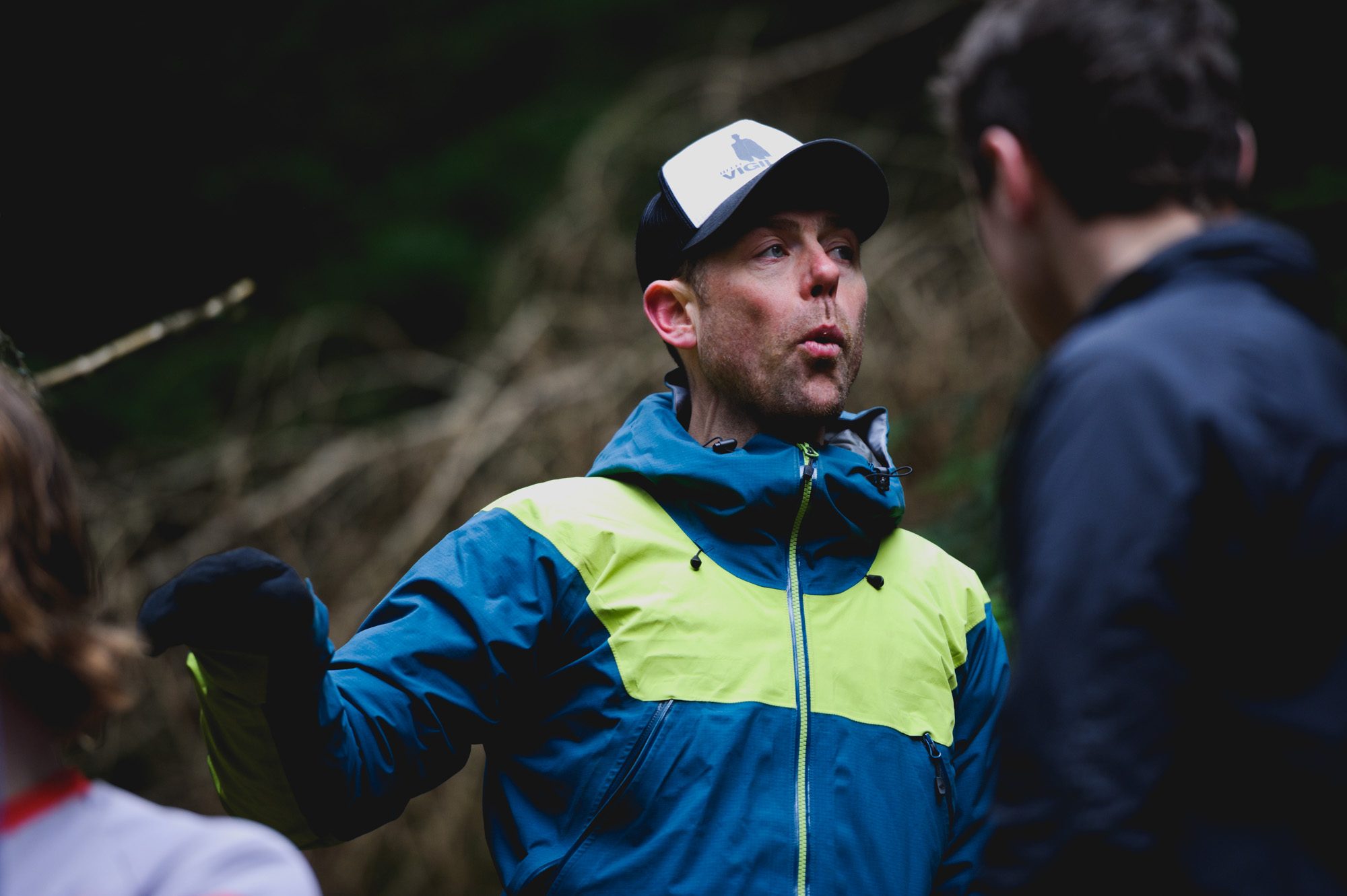 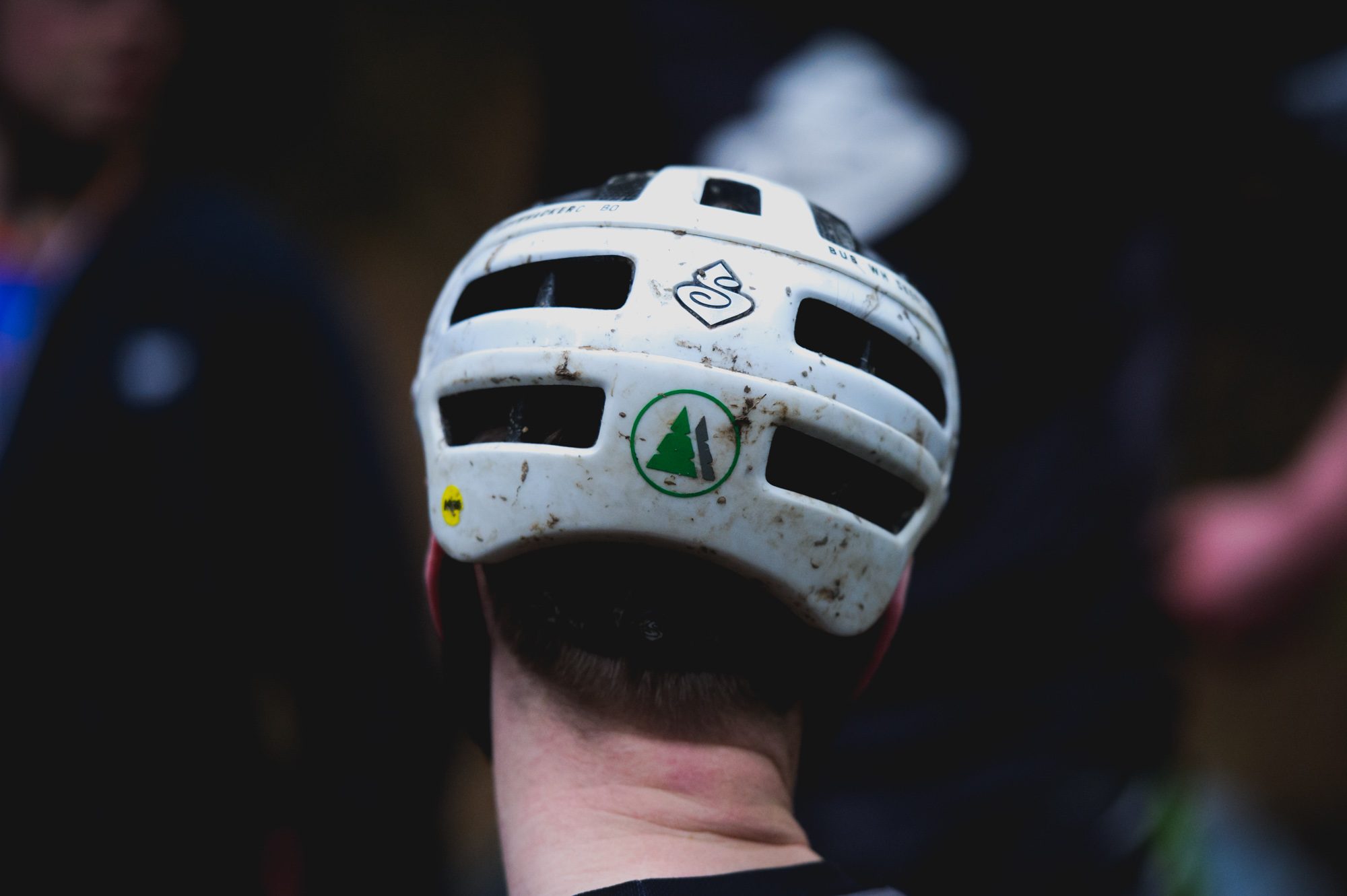 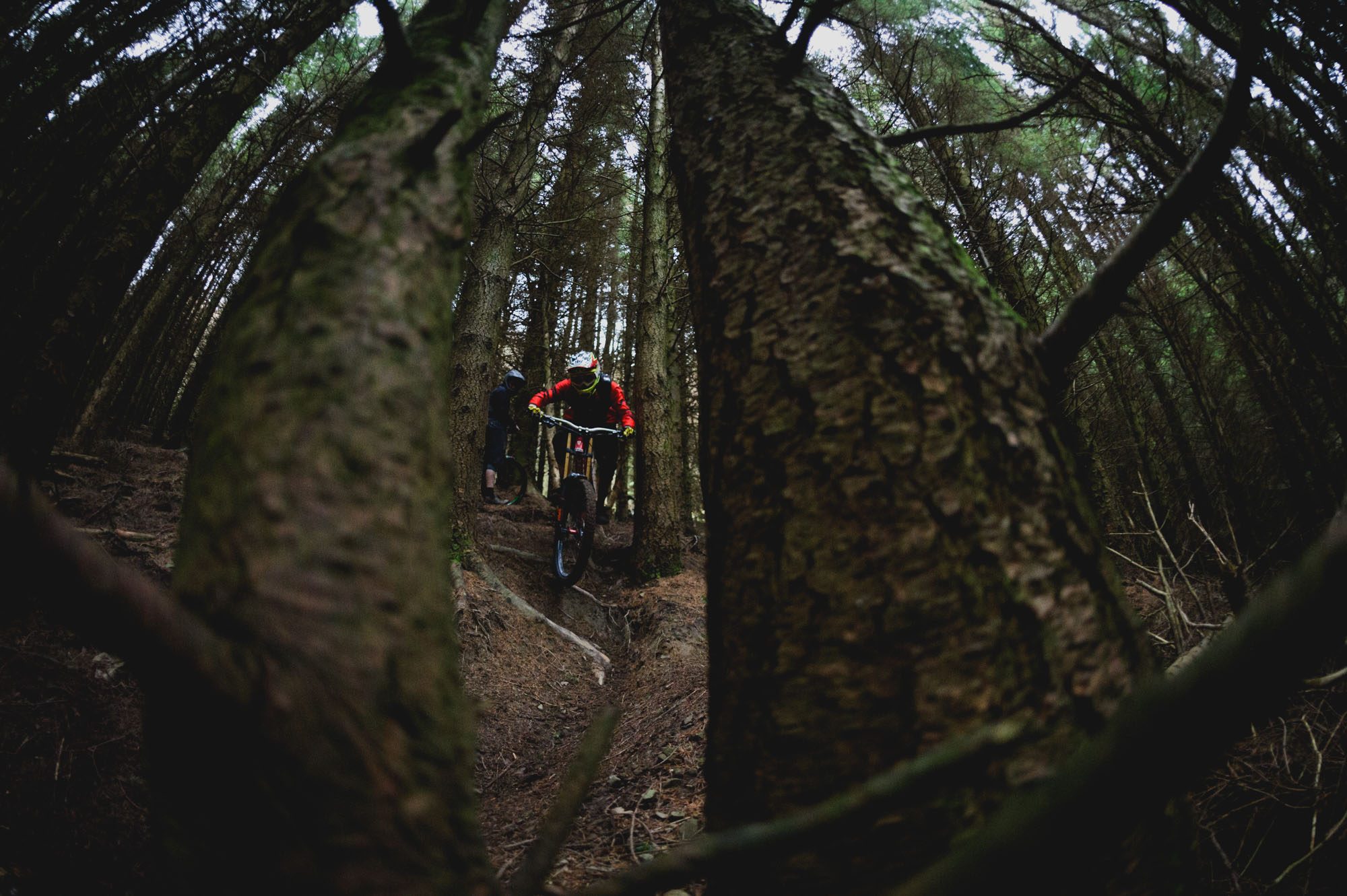 RV – So from the early days how has the focus of the course changed is there still a focus on downhill racing?

Andy – We’ve a 50/50 split. It used to be really focussed on downhill, we were BASE Downhill, but now we’re BASE Mountain Biking because we get a lot of interest in enduro as well.

RV – And is the course mainly for Scottish racers still?

Andy -This year it’s also pretty much 50/50, about half are from England and one guy’s from Wales. The rest are all either local or from around Scotland. Oh, and we’ve one guy from Nepal he read about the course in MBUK I think.

RV – That’s quite a catchment area.

Andy – There’s nothing like this anywhere in the world as far as we’re aware. The course purely focuses on performance. Our syllabus is called Technical Tactical so we break it down into technique – which is the first half of the course, then tactical – which gives them a game plan to go into competition with. It’s all about the attitude on the course, you break down the processes, you set yourself goals, you stick with it and make it happen. Technically it’s known as the curriculum of excellence.

RV – How does the course structure work within the academic year?

Andy – We start with an open day, then a month later will have interviews. We have limited places on the course so we have to have a selection process. That’s not always based on ability, we’ve had some fairly weak riders who have had a really good attitude and we’ll pick up on that and they’ll get on the course because they’re really keen and will dedicate themselves.

Typically the course starts in September and we start with body position. The first part of the course is about trail etiquette, being prepared, we really stress that if they turn up with all their spares, all their stuff then the course can run like clockwork. So we start establishing a really firm ethos and attitude right from the start. From there we start spending a lot of time on body position and line choice, having control on their bikes. At the same time Kenny, at the college gym, will be spending time talking about correct lifting technique, good posture, getting them set for gym work.

As we start focusing on adding speed and getting tactical, Kenny’s making similar changes in the gym. We try to coordinate it all. Come Spring it’s time to focus less on technical and get tactical, we’re practising and refining race strategy. We’re concentrating on breaking apart all the different sections and analysing effort.

Tuesdays and Thursdays are full days on the bike with the rest of the week split between the gym and the classroom. Students also learn about sports psychology, nutrition, teamwork, physiology, technical analysis and basic training principles.

We focus a lot on what we call performance based goals in competition and less about result based goals. So really the crux here is when someone goes into a competition they rate their success on their place – they may be aiming to be top five, but how do they get there? They don’t have a plan. So that’s what we’re doing with these guys. We’re breaking it down into how well are they cornering, what are they looking at, whether they’re hitting their lines, where they’re braking, how they react when they make a mistake – do they go harder or just back off and relax? That way they can break a race run down into a series of performances, that’s your list of goals for the weekend and the results should speak for themselves. That’s the end goal. Today’s session is fairly typical – we’ll spend the day focussing on a skill, or an obstacle, or in this case a race scenario. 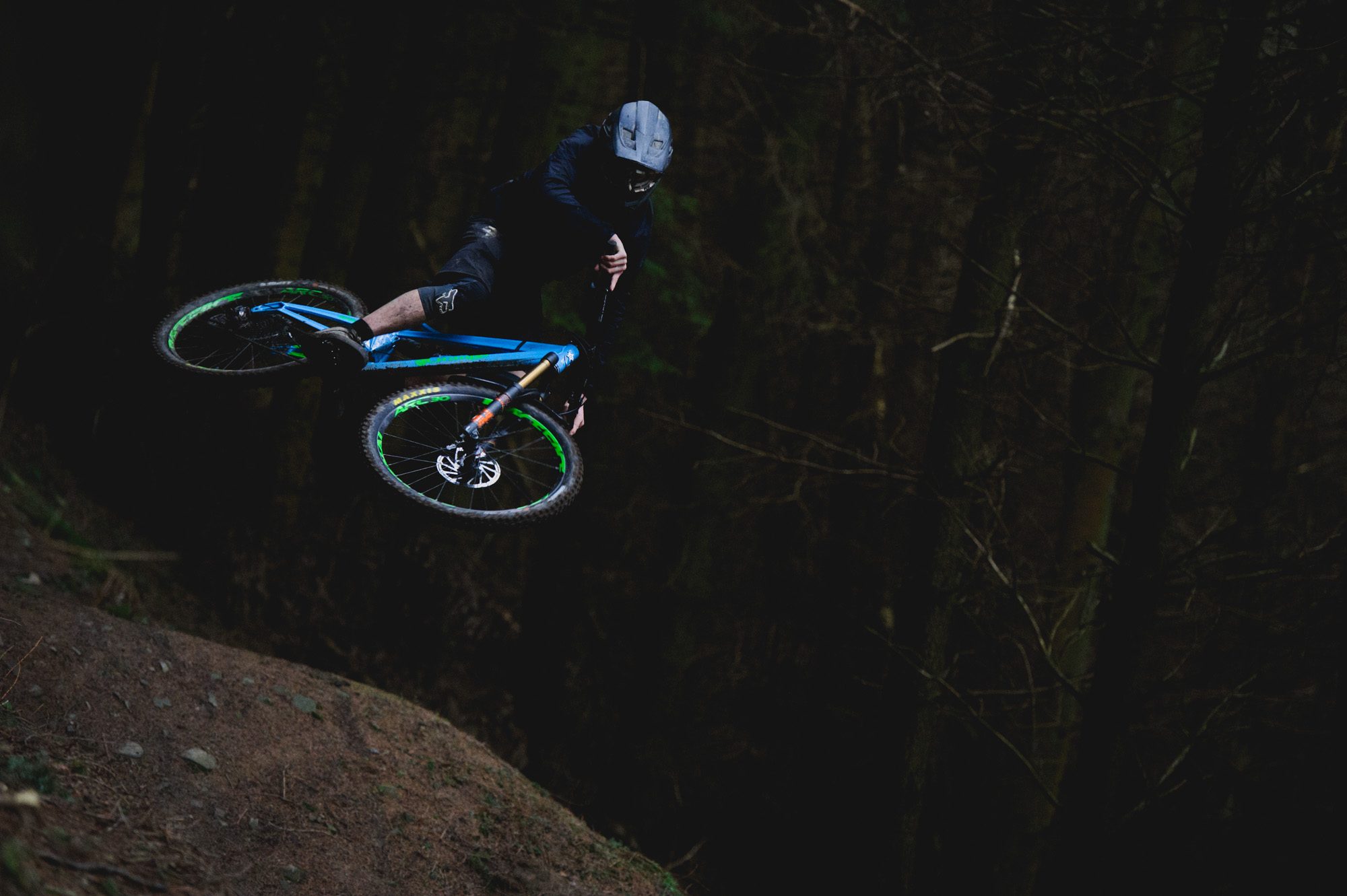 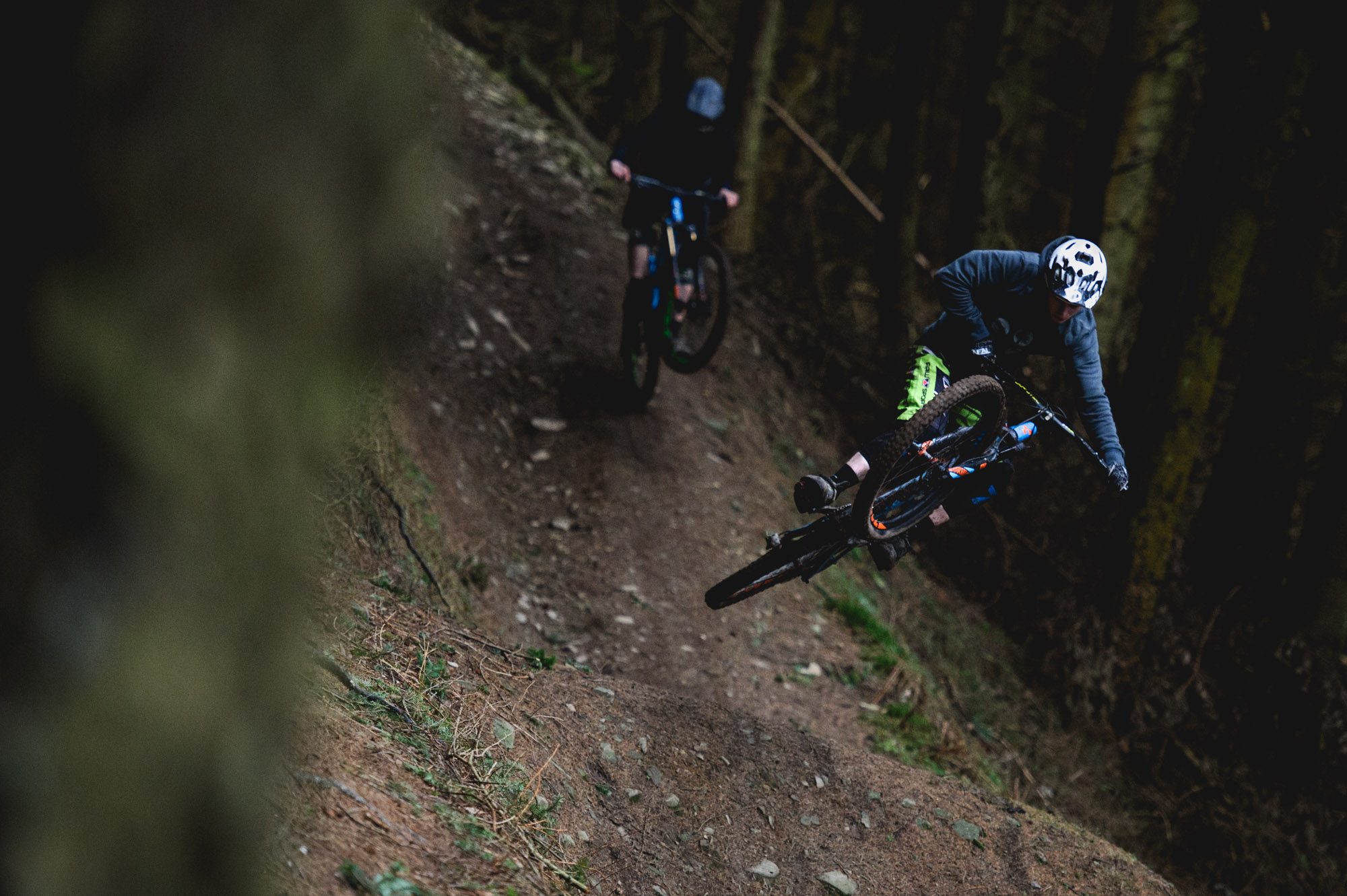 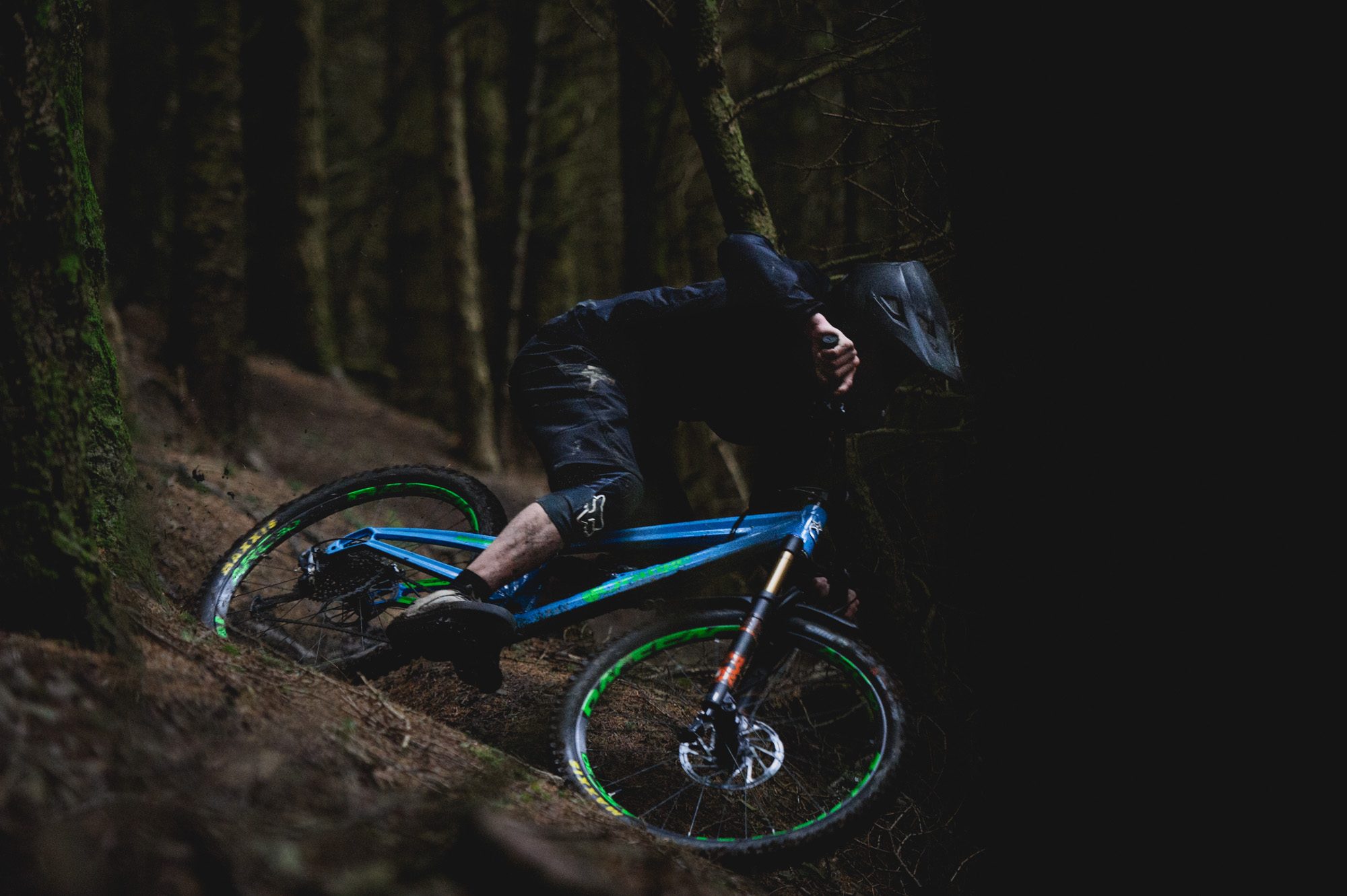 RV – Are there plans to further improve on the course?

Chris Ball – It’d be really good to integrate trail building into it, but at the moment there’s no trail building certificate that’s recognised. There’s a really good course in Capilano University in Vancouver – it’s mountain biking but they get taught tourism, trail development, trail design and hospitality type stuff.

It’s hard finding guides, it’s almost impossible to find really good coaches because there’s not been any development, but this gang from the last five to seven years of BASE will be amazing in a few more years when they’ve gained a bit more experience. Up until now there’s been a dearth – the sport has grown exponentially, but there was no structure in place ready for that boom.”

So, Flat White up on the Golfie (one of Innerleithen’s riding hotspots) – two of the lads from the course built that and I was so proud because they’d built every corner pretty much perfectly because they had a fundamental understanding how to ride a corner. They’d built the corners with the right load, the right weight, the right shape, until they got near the bottom and you could tell they just wanted to get to the bottom and ride it. You’ll see a lot of trails do that, they start amazing then there’s a point where they just want to finish it and ride it. But that’s another transferable skill, they’ve just gone off and designed and built, taking the work ethic from the course, and the riding skill from the course and put it into what is now one of the best trails in the (Tweed) Valley

RV – And in the months after it went public, everyone wanted to ride it. It became a destination in itself.

Chris – That’s true and I’m not even sure that the lads realise and know of the impact of that. They’re so intense in what they do, they may not realise what they’ve created. 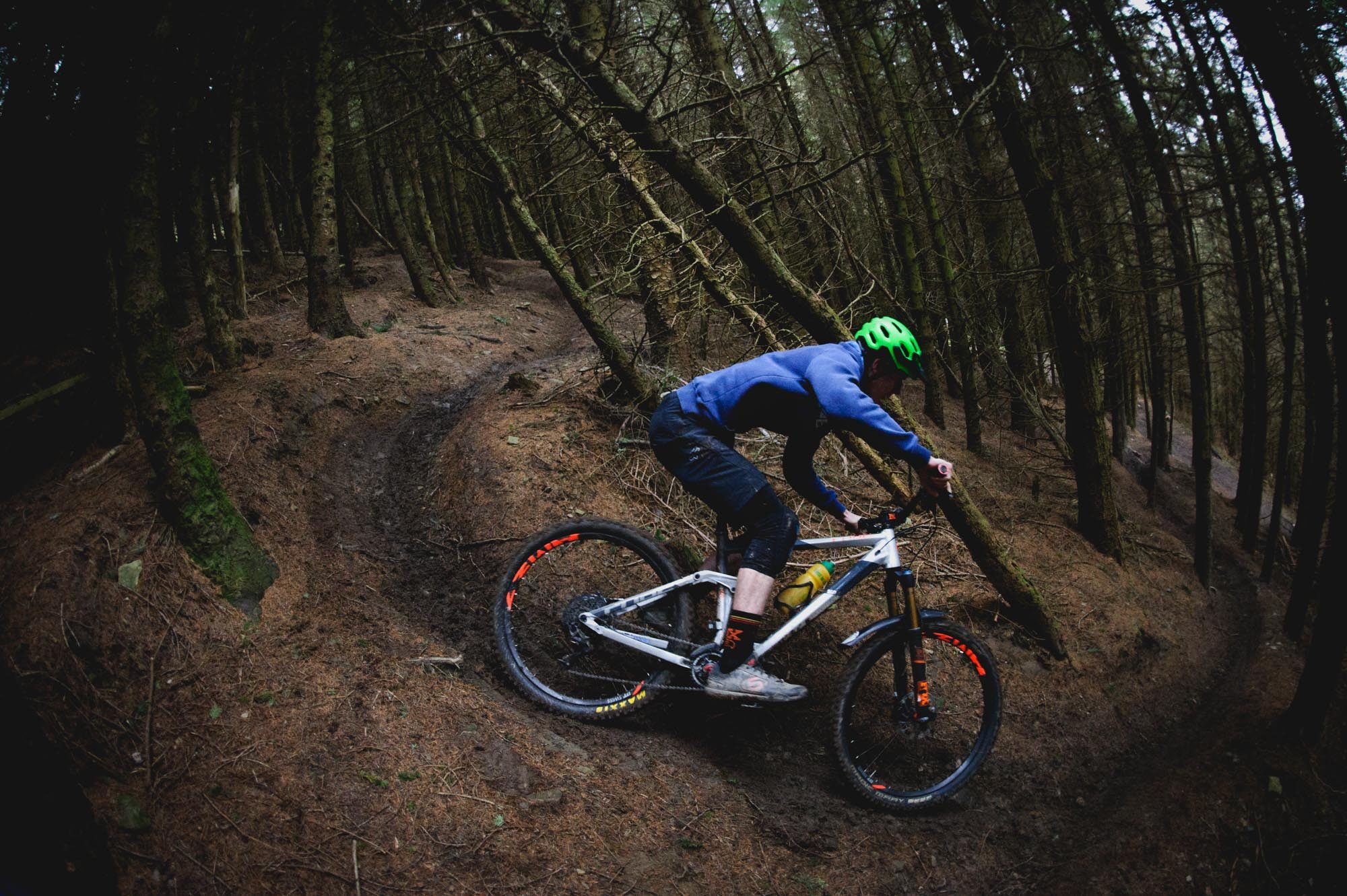 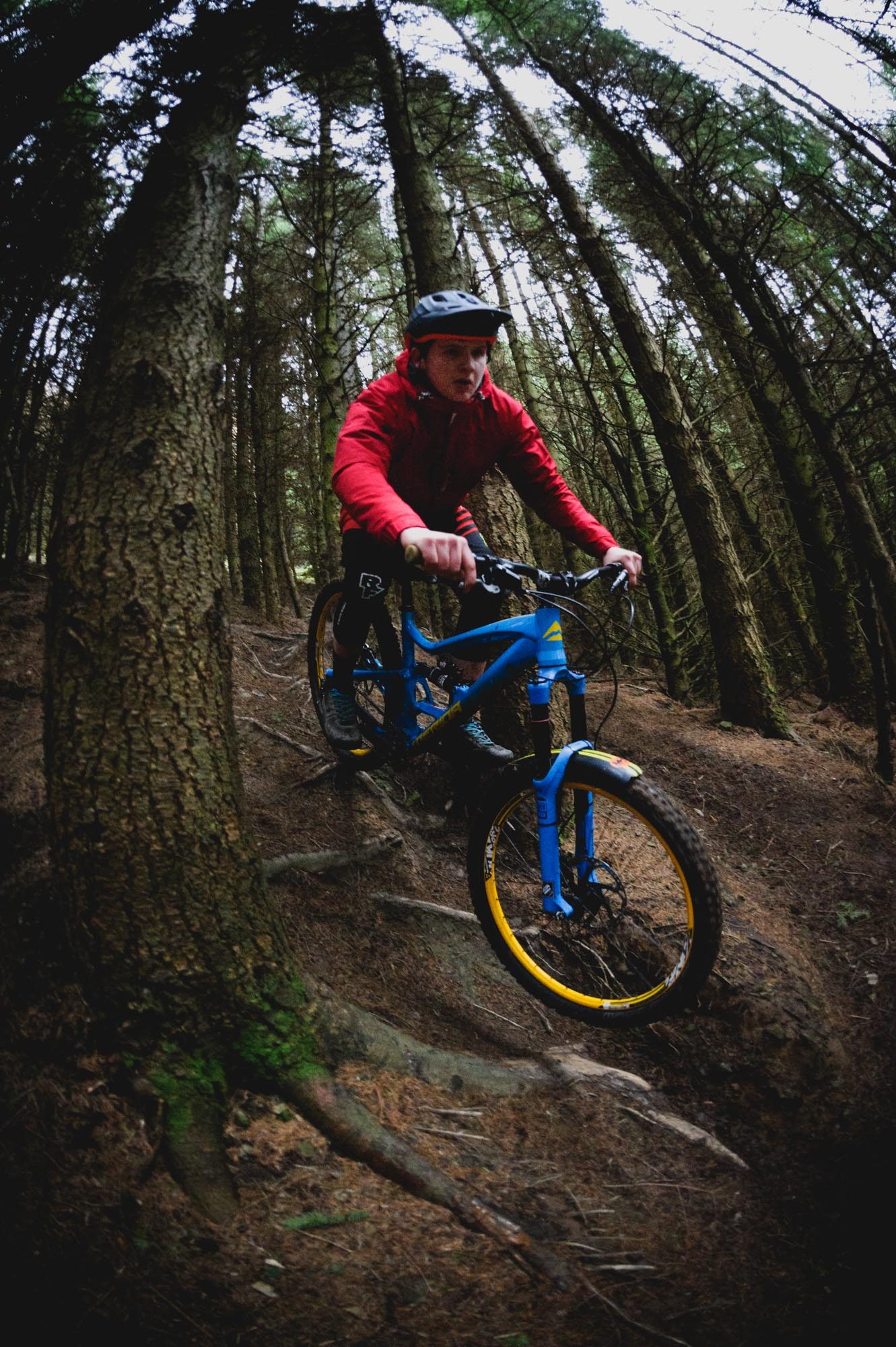 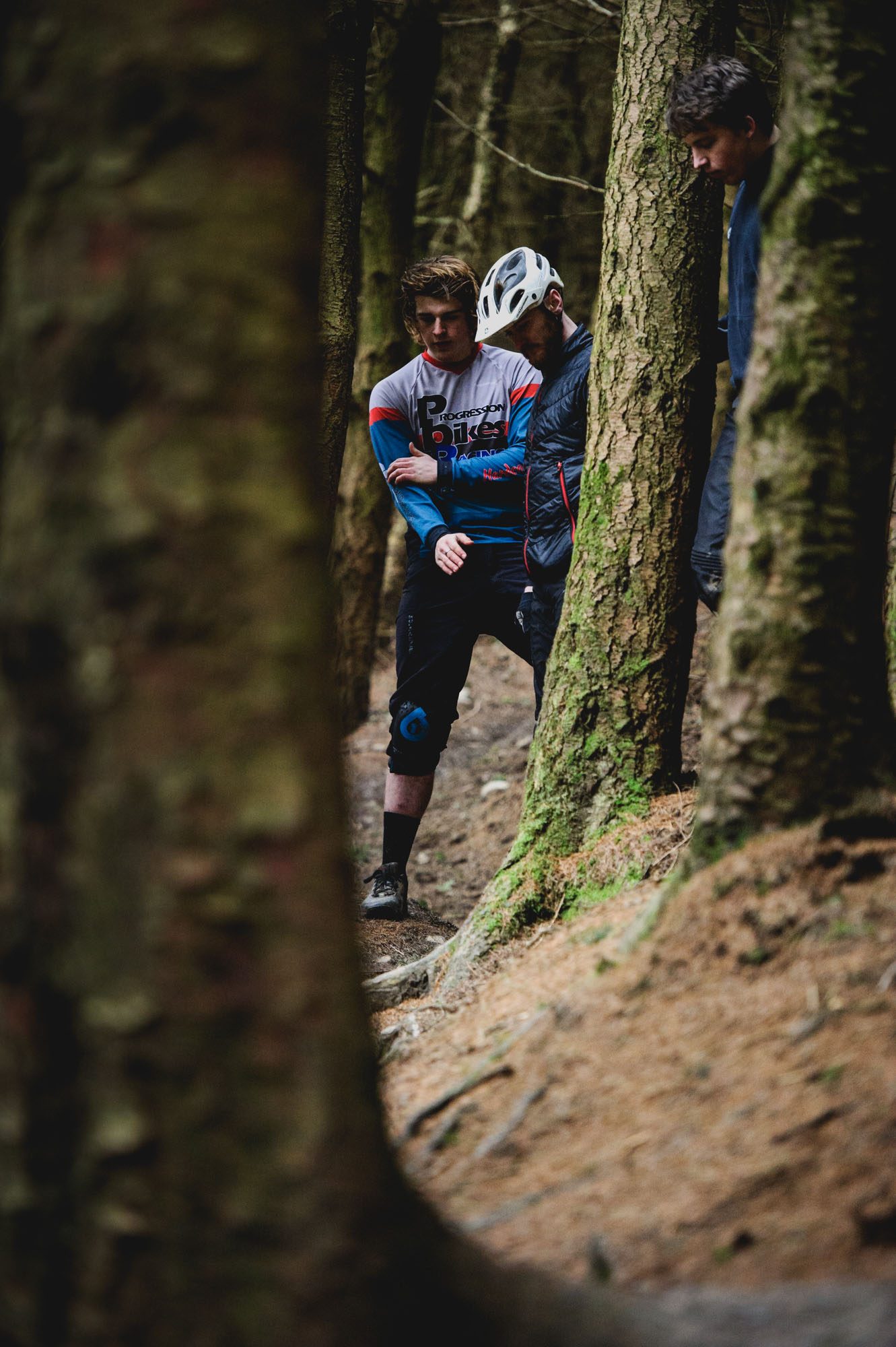 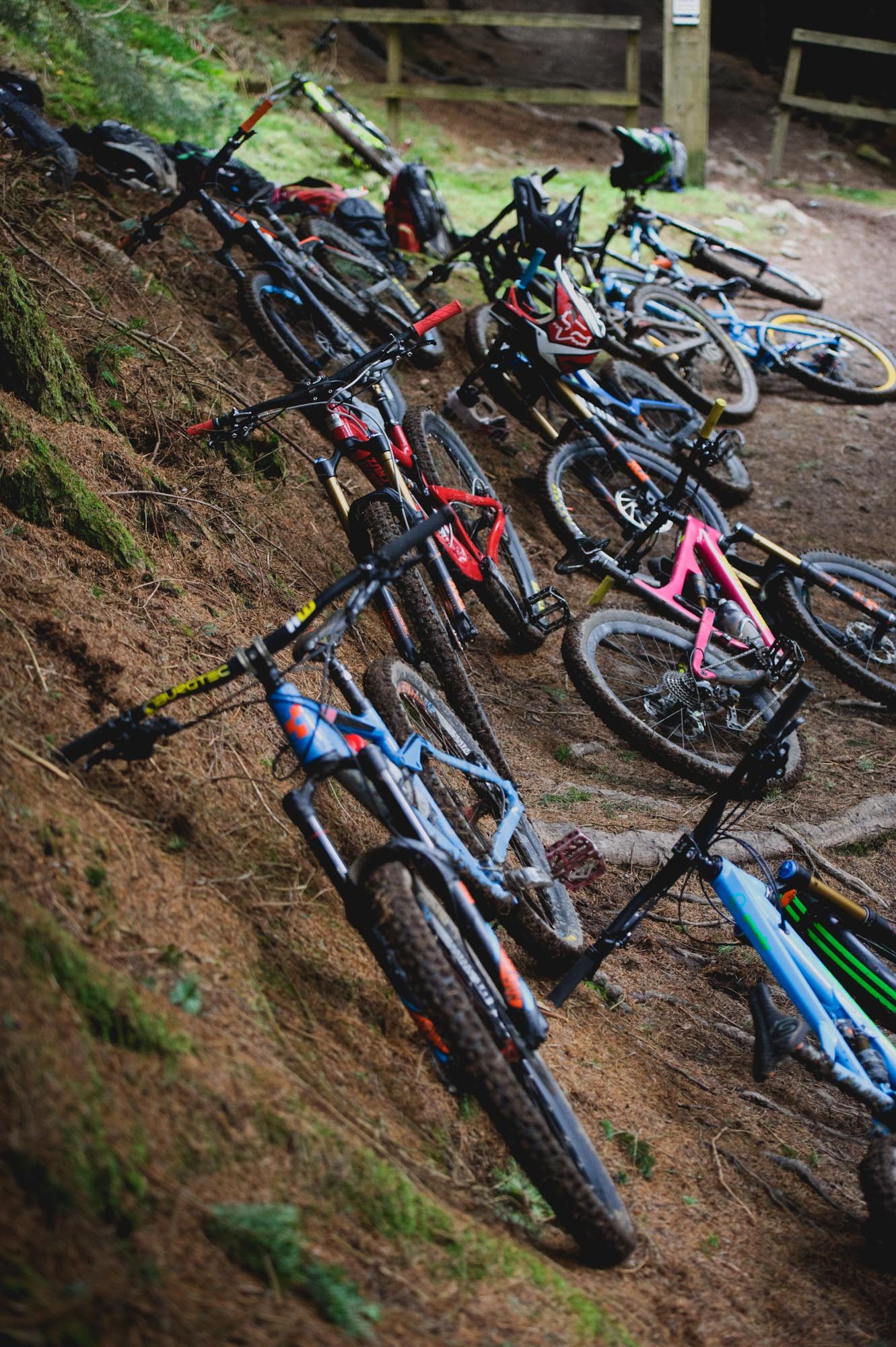 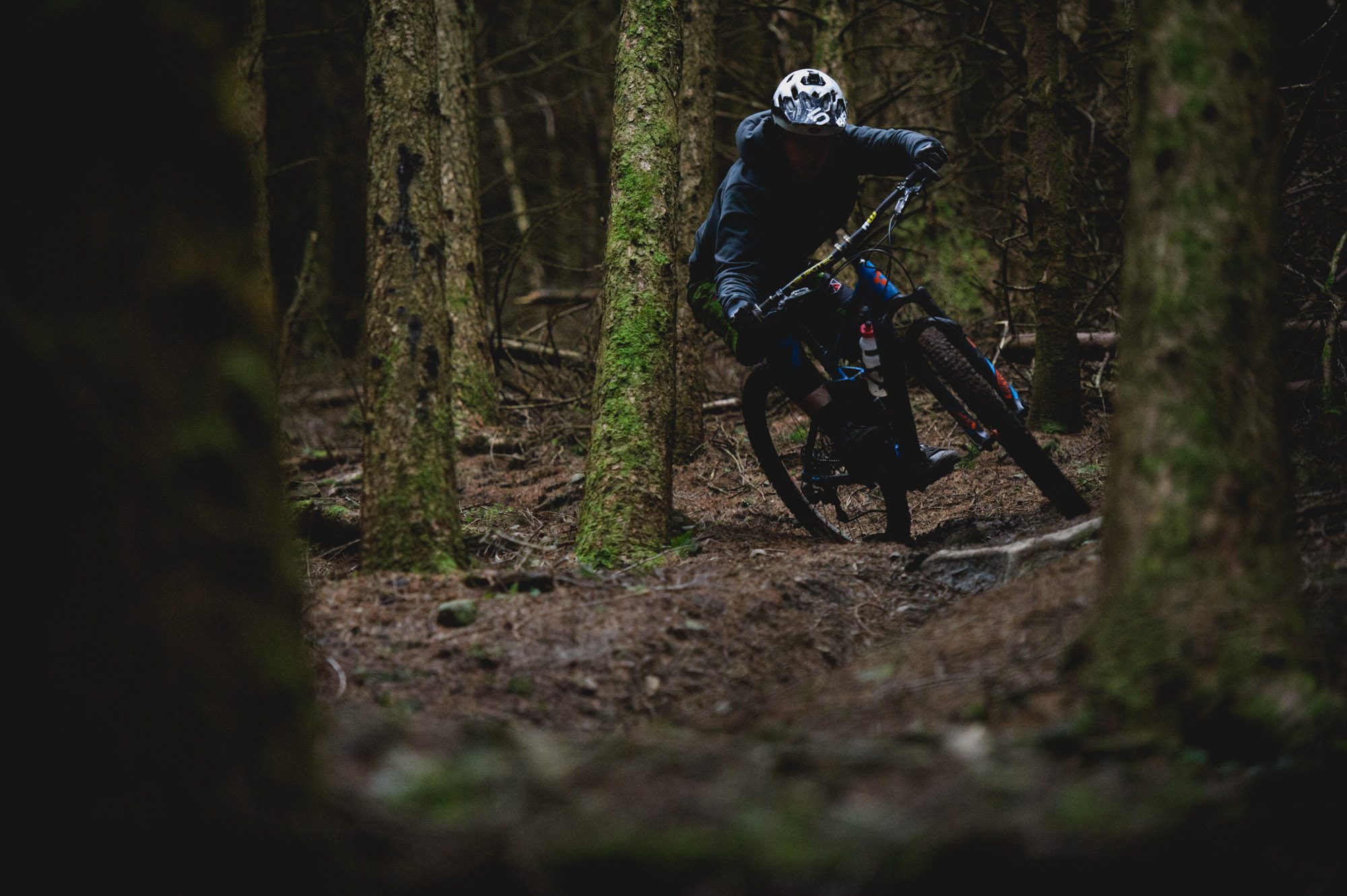 Andy – It’s good for Dirt School that we’re involved in this, we use this as almost a piece of research and development. A lot of the teaching and feedback we get from the sessions with these guys goes into how we coach our regular clients too.

If I’m honest these guys are the exception to what we do, most of the work that Dirt school does is with regular enthusiasts, by comparison these are the sharp end. It’s a good partnership with the college, I’m not sure anyone else could deliver what we do. We promote BASE through all our channels, which results in us getting the best riders, which benefits the college too. So it’s worked really well.

Many thanks to Dirt School and Borders College Scotland for their help with this feature.

Read this on Pinkbike